Years ago during my studies I developed a small Turing Machine simulator in ANSI-C which was never released to public. It seems to work nicely, so I finally decided to publish it. 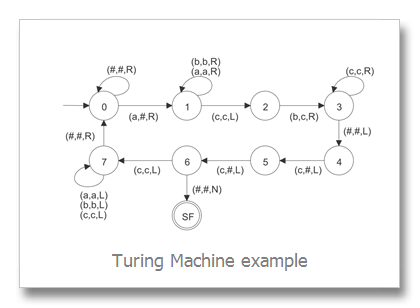 Also tapes – like the Turing Machine (program) itself – can be initially be loaded (data input), and the resulting tape can be stored (data output). Thus, rudimentary data I/O processing is possible. Of course the whole program has a more “experimental academic” character, but maybe it’s useful  nonetheless.

Some example programs are included, too.  E.g.:

PDF Documentation is in German only, sorry :-(, but program has english language output

If you want to run this program on a different platform/OS just recompile the sourcecode with a C compiler. It should be really easy. E.g. for Linux: gcc simtur.c.

This entry was posted in Software, Tech Stuff. Bookmark the permalink.

3 Responses to SIMTUR – a Turing machine simulator in ANSI-C